Members of the Society gather for food, drink and conversation at The Union Bar/Grill in Paddington Basin, London. 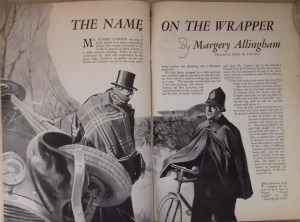 B. J. Rahn has located some illustrated short stories by Margery. Here are photos of some of the illustrations which are by Jack M. Faulks. 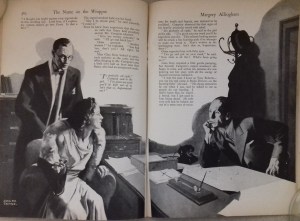 The Society is affiliated to the Alliance of Literary Societies and one of the benefits we receive is a regular newsletter which gives updates on the latest activities among the many societies devoted to literary figures and their writings. You can access the Autumn 2019 Newsletter via the link below:

The Alliance of Literary Societies, to which the Margery Allingham Society is affiliated, has published its 2019 journal on the theme “When Writers Attack: Authors in the Public Sphere”.

You can access the journal via this link: ALS 2019 Journal

The Society’s AGM passed off without incident in the library of the University Women’s Club in Mayfair before moving on to the main business of the day, the Birthday Lunch.

The special guest Edwin Buckhalter, publisher of Mike Ripley’s Campion continuation novels, cut the cake and gave an entertaining speech describing how his interest in detective fiction was sparked by working in the family bookselling business where he was frequently called upon to collect books from publishers’ trade outlets and was often given free copies to take home and read. Sounds like the perfect holiday job! 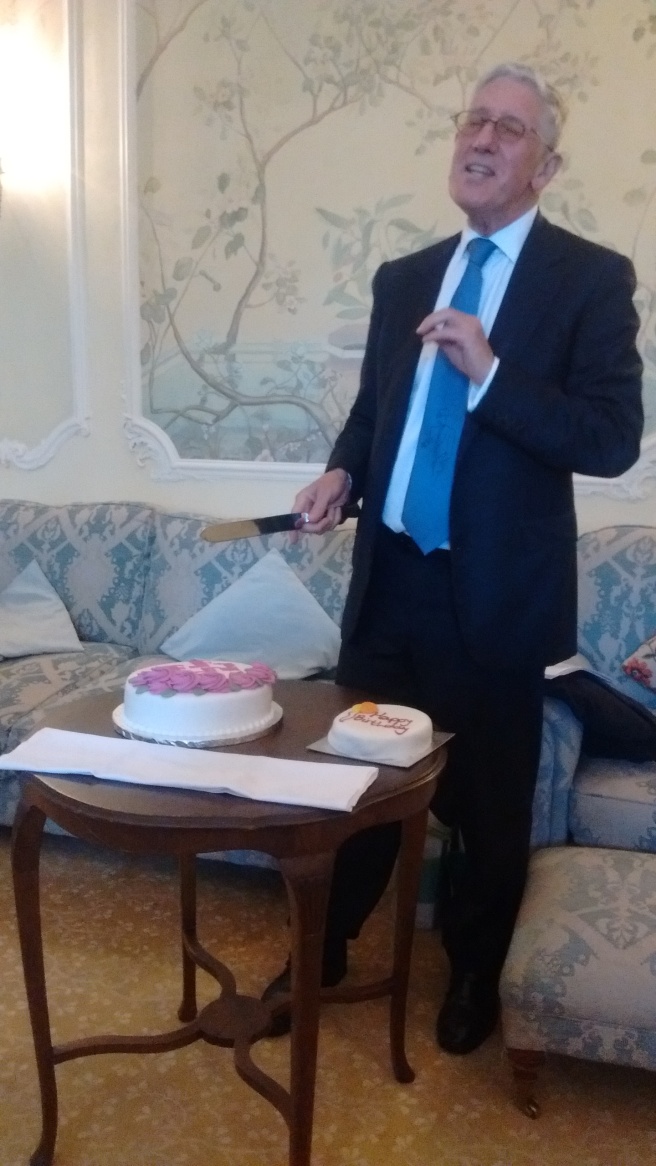 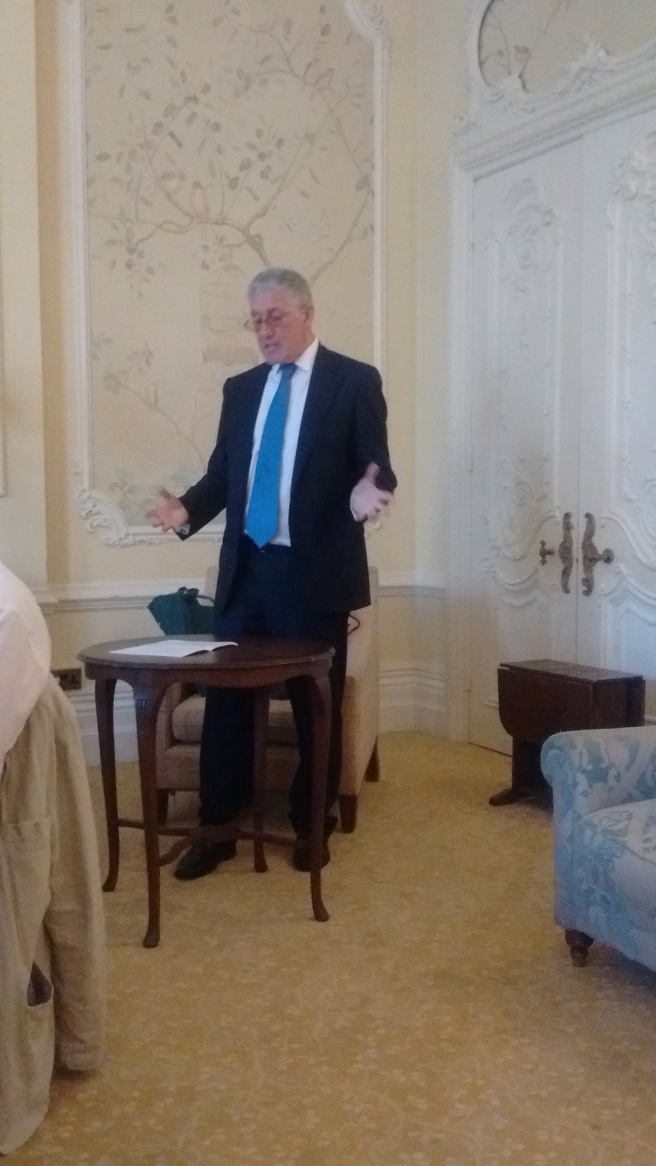 The Margery Allingham Society was represented at the annual weekend gathering of the Alliance of Literary Societies, hosted by the George Eliot Foundation in Nuneaton.

In the rather splendid surroundings of the Council Chamber of Nuneaton Town Hall, we heard a lecture by Kathryn Hughes on George Eliot’s early experience as a milkmaid on her father’s tenant farm, which, she proudly told friends, gave her a more muscular right hand than her left owing to the hours churning butter. But when her glove was produced at the climax of the talk it proved to be a size 6 1/2 – the second smallest size produced commercially for Victorian women. Several ingenious solutions to this mysterious conundrum were proposed by members of the audience. Clearly there is here the basis for a plot to puzzle even Albert Campion!

The Society provided a copy of The Case of The Late Pig as one of the prizes in the fundraising raffle and we succeeded in recruiting a new member during the day who joined online through the website while talking with our representatives at the gathering.

The final day of the Convention began with a presentation by Catherine Cooke on Post-War Domestic Economy – or how to live on 1/6 a week, a subject close to Margery’s heart as she managed her household during and after the Second World War.

Mike Ripley, author of (amongst many other works) the Campion continuation novels, then gave an entertaining talk on Pirates, Gunmen, Puzzlers and Stout Fellows: Margery Allingham’s attitude to the thriller. Indeed, Margery herself blurred her own categorisations in many of the Campion novels mixing the puzzle element with the thriller in several novels.

The final session of the convention, Prequel and Sequel was presented by Julia Jones who has published a biography of Margery’s father Herbert Allingham – the prequel element – and Margery’s final non-fiction work, not published in her lifetime, The Relay – the sequel element. Julia covered the Allingham family story from the Victorian generations through to the end of Margery’s life.

Dr Jennifer Palmer discussed Margery’s women through the decades from 1928 to 1968 considering fashions in both dress and hairstyle in the context of the social developments that took place across Margery’s career.

The special guest speaker was Helen Dorey, MBE, FSA, Deputy Director of the Sir John Soane’s Museum in Lincoln’s Inn Fields, London. Her talk included fascinating insights into the attempted armed robbery of the museum which she related with both tension, as the plot came to light, and humour as she described how burly policemen squeezed into the museum porters’ overalls to guard the museum incognito.

The morning concluded with Mark Green giving a comparison of the demands that Margery placed on her readers measured using the Gunning Fog Index and comparing her with the other queens of crime. Margery was found to be the most challenging author to read, though Dorothy Sayers ran her a close second.

The afternoon was devoted to a trip to Tolleshunt D’Arcy where Margery lived and worked for most of her career. The trip included a rare opportunity of a guided tour of D’Arcy House, Margery’s home, and gardens, which are now in private hands. The tour was followed by a traditional afternoon tea in the village hall, described by Margery in her non-fiction work about her wartime experiences, The Oaken Heart. 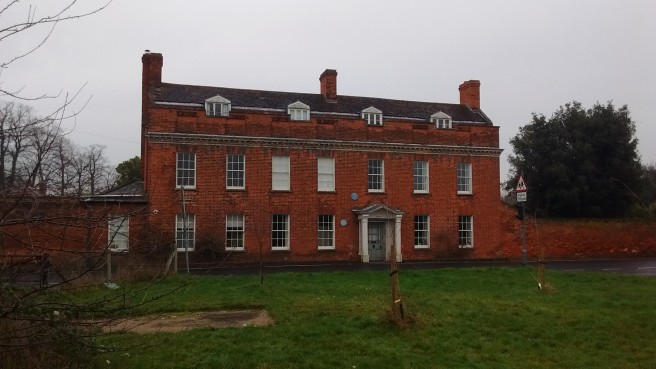 The day concluded, after dinner, with a screening of the 1956 film version of Margery’s thriller, The Tiger in the Smoke, starring Donald Sinden.

The first day of the Society’s 2019 Convention featured a visit to the University of Essex Albert Sloman Library which includes in its private collections the Margery Allingham Archive on loan from the Society.

Delegates were able to view amongst other items the prop Virgin and Child “Sainte-Odile Treasure” from the film of The Tiger in the Smoke, a certificate of recognition, signed by both King George VI and Queen Elizabeth for Margery’s war-work (documented in her non-fiction book The Oaken Heart) and a prize from the Ellery Queen Mystery Magazine for her mystery fiction.

After dinner, Barry Pike concluded the first evening with an illustrated talk comparing the first edition covers of Margery’s novels in the UK and the USA. The general consensus of the delegates was that Pip Youngman Carter’s designs for the UK editions were more evocative of the spirit of Margery’s writing.

Margery spent the greater part of her writing career living in and around the Essex village of Tolleshunt D’Arcy. She was a leading figure in village social life and, were she still alive, would no doubt be deeply involved in the current efforts of the villagers to raise funds to rebuild the Village Hall, which is sadly “past its sell by date”. The link below gives more information about the project and the efforts being made to raise funds for its completion.